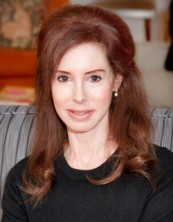 Susan Shapiro Barash is an established writer of thirteen nonfiction women’s issue books, her most recent title is The Nine Phases of Marriage (St. Martins, 2012). A well recognized gender expert, Barash is frequently sought out by the media and blogs for the Huffington Post and Psychology Today.  She has been featured in The New York Times, The Wall Street Journal, The Chicago Tribune, Elle, Marie Claire, The Examiner.com and Yahoo Shine! and has appeared on national television including the Today Show, Good Morning America, Fox News, The O’Reilly Factor and  MSNBC. Barash has been a guest on national radio including NPR and Sirius Radio, and her speaking appearances include Credit Suisse, Bayer Diagnostics, UBS, UJA Federation, and the Society of the Four Arts. Several of her titles have been optioned by Lifetime and HBO.

Barash holds degrees from Sarah Lawrence College and New York University.  She teaches in the Writing Department at Marymount Manhattan College where her focus is on gender studies. She has served as a literary panelist for the New York State Council on the Arts, as a judge for the International Emmys, and as Vice Chair of the Mentoring Committee of the Women’s Leadership Board at the JFK School of Government, Harvard.

Whether you are about to embark on your first relationship, or you are in a marriage that is not providing the emotional gratification you anticipated, or you are looking at your failed marriage in retrospect trying to wise up for the next one, The Nine Phases Of Marriage: How To Make It, Break It, Keep It , with its wide-scope exploration and terse examination of an institution that is striving between old formulas and new expectations, provides an insightful guide to self-reflection and emotional clarity.

...In Toxic Friends, Barash skillfully channels her interviewees' experiences and convinces that these real and raw friendships are the norm: 'When it comes to the glittering prizes of life, women congregate, even if there are undercurrents of envy, jealousy, and competition in the relationships.'

In Tripping the Prom Queen, Barash devotes chapters to specific areas of competition, from looks to career, and then presents real-life examples of situations in which resentment and jealousy can be used to improve one's life without destroying anyone else's. Overall, this study provides a helpful starting place for any woman wondering if it's possible to get what she wants without hurting or being hurt.