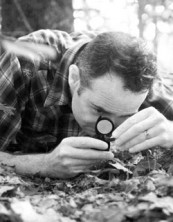 David Haskell’s work integrates scientific and contemplative studies of natural world. His book, The Forest Unseen: A Year’s Watch in Nature (Viking Penguin, 2012), was winner of the National Academies’ Best Book Award for 2013, finalist for the 2013 Pulitzer Prize in non-fiction, winner of the 2013 Reed Environmental Writing Award, winner the 2012 National Outdoor Book Award for Natural History Literature, and runner-up for the 2013 PEN E. O. Wilson Literary Science Writing Award. A profile in The New York Times said of Haskell that he “thinks like a biologist, writes like a poet, and gives the natural world the kind of open-minded attention one expects from a Zen monk rather than a hypothesis-driven scientist.” E.O. Wilson called Haskell’s work “…a new genre of nature writing, located between science and poetry in which the invisible appear, the small grow large, and the immense complexity and beauty of life are more clearly revealed.”

Haskell holds degrees from the University of Oxford and from Cornell University. He is Professor of Biology and Environmental Studies at the University of the South, where he served as Chair of Biology. He is a John Simon Guggenheim Memorial Fellow, a Fellow of the American Council of Learned Societies, and was granted Elective Membership in the American Ornithologists’ Union in recognition of “significant contributions to ornithology.” His scientific research on animal ecology, evolution and conservation has been sponsored by the National Science Foundation, the Environmental Protection Agency, the Fish and Wildlife Service, the World Wildlife Fund, among others. He has also served on the boards and advisory committees of local and regional land conservation groups.”

Haskell’s classes have received national attention for the innovative ways they combine science, contemplation, and action in the community. In 2009, the Carnegie and CASE Foundations named him Professor of the Year for Tennessee. The Oxford American featured him in 2011 as one of the southern U.S.’s most creative teachers, and his teaching has been profiled in USA Today, The Tennesseean, and other newspapers.

He was recently awarded a Guggenheim Fellowship for research on his new book THE SONGS OF TREES (to be published by Viking Penguin in April 2017),  a study of humanity’s varied roles within biological networks as heard through the acoustics of trees.

“Very much a contemporary biologist in his familiarity with genetics and population ecology, he also has the voracious synthetic imagination of a 19th-century naturalist. Most important, Mr. Haskell is a sensitive writer, conjuring with careful precision the worlds he observes and delighting the reader with insightful turns of phrase.”

“An extraordinary, intimate view of life… Exceptional observations of the biological world…”

Over the course of four passing seasons, Haskell contemplates the forest’s "life" with the trained eye of a biologist and the eloquence of a published poet.

...a series of lessons taught by a master instructor with the mind of a scientist and the soul of a poet.

Science and poetry are not different things … The key is to see beyond the surface: That’s what poetry does and that’s what science does. They push us beyond the superficial appearance of things and we dive down into meaning. from an interview on To the Best of Our Knowledge

You can live a perfectly happy life never having heard of Shakespeare, but your life is in some ways a little diminished, because there’s such beauty there. And I think the same is true of nature. Much of it is useless to us, and that’s O.K. ... We lost the passenger pigeon and the U.S. economy did not tank. But we lost the passenger pigeon and we lost some of this remarkable music made out of atoms and DNA. from an interview with The New York Times

When you get down on the leaf litter, in the late summer when it’s really wet from a lot of rain, there is an incredible diversity of fungal fruiting bodies … a crazy other world. Like the surface of a planet that I wasn’t previously familiar with because I hadn’t been facedown on the forest floor with a hand lens very much. And here it is, right under my feet, all these weird little structures. You could imagine spaceships flying around, and in fact there they are in the form of fungal gnats. Then through a hand lens, a huge snail comes through. You know it’s only a centimeter or two long, but through a hand lens it’s this great creature covered in glossy glass. I’m a big believer in the legalization of hand lenses, because it really takes you into an altered mental state. And it doesn’t drive the drug trade. from an interview with SAGE Magazine

Finalist for the Pulitzer Prize 2013

Winner of a Guggenheim Fellowship 2014