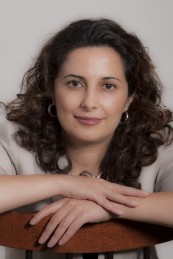 Nazila Fathi is a journalist, translator and commentator on Iran and the author of THE LONELY WAR: One Woman’s Account of the Struggle for Modern Iran (will be available on December 9, 2014). She reported out of Iran for nearly two decades until 2009 when she was forced to leave the country because of government threats against her.

She was based in Tehran from 2001 for The New York Times, during a time when she penned over 2,000 articles for the Times. Prior to that, she wrote for the Time Magazine, Agence France Press and the Times. She translated a book, History and Documentation of Human Rights in Iran, by the Noble Peace Prize Laureate, Shirin Ebadi, into English in 2001. She has written for the New York Review of Books, Foreign Policy and Harvard Nieman Report and has been a guest speaker on CNN, BBC, CBC and NPR.

Readers keeping an eye on the contemporary Middle East will learn much from Fathi's travels and observations.

Nazila Fathi’s riveting story of growing up under the Islamic Revolution and becoming one of the country's finest women journalists is told with passion and deep intelligence. A powerful read that sheds much needed light on Iran’s enduring contradictions, THE LONELY WAR is at once an intimate memoir of an Iranian who struggled to remake her country from within, and a chilling glimpse into how the state silences its critics.

-Azadeh Moaveni, author of Lipstick Jihad: A Memoir of Growing up Iranian in America and American in Iran

Richly informative and insightful—a wonderful book and a great read.

-Leila Ahmed, author of A Border Passage: From Cairo to America—A Woman's Journey

A poignant portrait of Iran’s tortured contemporary history through the eyes of one of the country’s most thoughtful and courageous journalists.

THE LONELY WAR reveals a new Nazila Fathi: not just the intrepid New York Times correspondent, but also a woman struggling through life in turbulent Iran. This book, like Marjane Satrapi’s Persepolis, mixes the personal with the political against a backdrop of war and revolution. Provocative, moving, insightful, and full of scary characters, THE LONELY WAR takes us deep inside one of the world’s most fascinating societies.

-Stephen Kinzer, author of All the Shah’s Men: An American Coup and the Roots of Middle East Terror

A provocative first-hand account of how the Iranian middle class survived the Islamic revolution, eventually rising like the phoenix from the ashes to claim its place in society and politics. Insightful, empathetic, and gripping, this is a story of a nation’s despair and hope and a window onto what the future holds for Iran.

Nazila Fathi’s THE LONELY WAR is both a touching personal story that illuminates the struggles of life in Iran and a broader reflection on the sociopolitical effects of the Islamic revolution on the Iranian people. With so much misinformation about Iran in the national discourse, Fathi’s book is a valuable resource for anyone looking to read beyond the headlines.

-Hooman Majd, author of The Ayatollah Begs to Differ: The Paradox of Modern Iran

As fearless as it is honest, THE LONELY WAR tells the inside story of how Iranians have grappled with—and also been inspired by—their Islamic Republic. Journalist Nazila Fathi gives us a powerful personal account of coming of age in revolutionary Iran, exploring Iran’s turbulent modern history through a remarkable cast of real characters and deftly navigating Iran’s cultural and political divide to provide us a superb picture of what makes Iran today.

-Scott Peterson, author of Let the Swords Encircle Me: Iran—A Journey Behind the Headlines

Drawing on more than a decade of reporting for the New York Times in Iran, Nazila Fathi has written a lucid and highly engaging portrait of Iranian politics from the 1979 revolution to today. One of the book’s most illuminating features is her vivid portrait of the impoverished recruits for the paramilitary Basij and Revolutionary Guard Corps—including their subsequent disillusionment and adoption of a more middle class, secular life style. Highly recommended for college courses.

Nazila Fathi has been awarded the following fellowships:

Nieman Fellowship for Journalism at Harvard