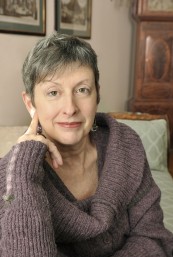 Joan DeJean has been Trustee Professor at the University of Pennsylvania since 1988.  Before then, she taught at Princeton and Yale.  She grew up in Louisiana in a French-speaking family and was educated at Newcomb College/Tulane and then at Yale.

She has written extensively about France and the French and about the city of Paris.  Her most recent books include How Paris Became Paris: The Invention of the Modern City (Bloomsbury, 2014), The Age of Comfort – When Paris Discovered Casual, and the Modern Home Began (Bloomsbury, 2009), and The Essence of Style: How the French Invented High Fashion, Fine Food, Chic Cafés, Style, Sophistication, and Glamour (Simon and Schuster/The Free Press, 2005).

This lively history charts the growth of Paris from a city of crowded alleyways and irregular buildings into a modern marvel.

DeJean is a charismatic and knowledgeable narrator… With panache and examples from primary sources, guidebooks, maps, and paintings, she illustrates how Paris changed people’s conception of a city’s potential.

-Publishers Weekly - Book of the Week

THE AGE OF COMFORT is a fascinating and carefully researched volume... This way of looking at history, moving outward from the particulars of everyday life, is particularly thrilling.

THE ESSENCE OF STYLE is an effervescent account of the birth of French chic...sparkling chapters...packed with savory tidbits.

Winner of the 2003 MLA Aldo and Jeanne Scaglione Prize for French and Francophone Studies for her book THE REINVENTION OF OBSCENITY: Sex, Lies, and Tabloids in Early Modern France

Joan DeJean has been awarded fellowships by the John Simon Guggenheim Memorial Foundation, the National Endowment for the Humanities, and the American Council of Learned Societies