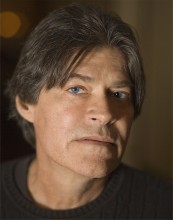 Jack Ketchum is the pseudonym of a former actor, singer, author’s agent, teacher, copy writer, lumber salesman, soda jerk and short-order cook, and the author of thirty books to date – novels, novellas, story collections, essays, memoirs and poetry, mostly in the areas of horror and suspense. Of his fourteen novels, which have been translated into fifteen languages, five have been filmed – THE LOST, THE GIRL NEXT DOOR, RED, OFFSPRING and THE WOMAN.

Ketchum has been a full-time writer since 1986. Just prior to that he was a literary agent for three years with Scott Meredith, Inc., representing such clients as Norman Mailer, Arthur C. Clark, Robert Bloch and Evan Hunter. He was Henry Miller’s last agent, and was responsible for bringing the author of TROPIC OF CANCER to his agency.

He is the four-time winner of the Bram Stoker Award from the Horror Writers Association and was elected Grand Master at the 20011 World Horror Convention. His script for THE WOMAN, co-written with director Lucky Mckee, won Best Screenplay at the Sitges Festival in Germany. His book, THE CROSSINGS, was cited by Stephen King at the 2003 National Book Awards. He is a frequent reader at the KGB Bar Writer’s Series in New York City, has taught writing seminars at Pine Manor College, Borderlands Workshop and the Odyssey Writers’ Workshop in New Hampshire, and for three years has held an online writers’ class called TALKING SCARS at LitReactor.com.

In 2015 Ketchum was honored with the Bram Stoker Lifetime Achievement Award from the Horror Writers Association.

HIDE AND SEEK is a good novel, strong and true, scary yet uplifting in the classic horror manner. Ketchum writes with economy and power, in sentences that tighten like noose wire.

Ketchum has become a kind of cult figure among genre readers and a kind of hero to those of us who write tales of terror and suspense…Ketchum never stops, never flinches, never turns aside. He is, quite simply, one of the best in the business, on par with Clive Barker, James Ellroy, and Thomas Harris.

This is the real stuff, horror embedded in genuine literature, an uncomfortable dip into the pitch blackness in the underside of the American literary tradition.

When I read OFF SEASON, I knew that its writer was different; that he was working from that raw and risky perspective known as personal vision, and that he had written a novel that was his own, and not what a publisher wanted or expected. OFF SEASON is the genuine article, its horror insistent, visceral, and disturbing.

Eighteen years after its mass market release by Ballantine, Ketchum’s debut novel OFF SEASON gains hardcover publication. It’s about time…its bleak vision and extreme violence still influence horror today. Only a novel of expert articulation and emotional truth can cast such a long shadow, and Ketchum’s is both.

OFFSPRING may well be the most horrifying book you will ever read.

RED is tough, compassionate…transcends what could have been a standard revenge story and becomes something subtle and more eloquent: a vision of our place in the community of living things.

ONLY CHILD is uncompromising…with a wicked kick-in-the-teeth coda that will make your skin crawl.

Though Stoker-winner Ketchum is best known for his novels of hardcore horror (Off Season, etc.), the 19 stories in CLOSING TIME reveal his skill at crafting short and subtle mood pieces about everyday folk who find themselves wrestling with overpowering emotions that occasionally open them to macabre experience….most of the stories conclude with surprising O. Henry twists….These well-told tales are proof that quiet horrors wrought by a skilled writer can make powerful reading.

COVER…is an outstanding book…no heroes or villains, no monsters…just victims trying to crawl out of a deadly situation before they’re overwhelmed by it.

Don't open JOYRIDE unless you intend to finish it in the same night.

With CROSSINGS, Ketchum can rightly be called the Goya of horror literature.