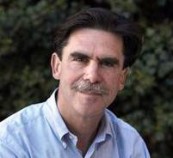 Fen Montaigne is a journalist, author, and editor who specializes in the environment, science, and international affairs. A Pulitzer Prize finalist, Guggenheim fellow, and former foreign correspondent who has written extensively for National Geographic magazine, Montaigne has authored or co-authored six books. He helped launch and is senior editor of Yale Environment 360, an online magazine that has won a host of awards and attracts 2.5 million visitors a year.

Fen’s latest book is the critically acclaimed Fraser’s Penguins: A Journey to the Future in Antarctica. The book tells the story of Bill Fraser, a U.S. ecologist who has done research in Antarctica for 40 years, documenting the decline of sea ice-dependent Adélie penguins as the Antarctic Peninsula has warmed faster than any place on earth. Fen spent nearly five months in Antarctica as a member of Fraser’s field team. The Sunday New York Times Book Review said, “Fraser’s Penguins leaves one feeling exhilarated — by these remarkable creatures, the landscape they inhabit, and the scientists who’ve devoted their lives to studying both.” The book was excerpted in The New Yorker and Fen appeared on “The Colbert Report” to discuss Fraser’s Penguins. He lectures on Antarctic voyages run by Lindblad and National Geographic.

Fen worked for 20 years as a newspaper reporter, primarily for The Philadelphia Inquirer, where he served as the paper’s Moscow correspondent during the collapse of the Soviet Union. Fen then became a freelance writer for 12 years, traveling to every continent but Australia as he reported on the environment and international affairs. A graduate of the University of Virginia, Fen also has written for Outside, Smithsonian, and The Wall Street Journal, among other publications.

Montaigne is a controlled writer, offering careful and clear explanations of matters technical and lexicographic, biologically microscopic and meteorologically global. But it’s his descriptive prowess, his ability to evoke lavender—and cobalt, magenta and violet—without waxing purple, that most impresses .... Sometimes telling less reveals more. At other times, Montaigne gives thrilling, blow-by-blow accounts of bird battles and breakups .... Fraser’s Penguins leaves one feeling exhilarated—by these remarkable creatures, the landscape they inhabit and the scientists who’ve devoted their lives to studying both.

In this sympathetic firsthand report, Montaigne describes the lives of both the researchers who brave the harsh weather and the penguins whose habitat is quickly becoming inhospitable to their reproduction. Montaigne’s compelling account is a clear and impassioned call for environmental action before the consequences of global warming turn catastrophic worldwide.

FRASER'S PENGUINS is a bittersweet account of the stark beauty of the continent and the climate change that threatens its delicate ecosystem. Montaigne poetically portrays the daunting Antarctic landscape and gives readers an intimate perspective on its rugged, audacious, and charming penguin and human inhabitants.

Exceptionally poignant. [Montaigne] voices the emotions that inundate everyone who works in this vast wilderness. And he captures details such as the fantastic scenery as the boat picks its way through broken sea ice dotted with resting seals and groups of penguins squint-eyed under a dazzling light.

Montaigne's REELING IN RUSSIA is an enlightened travelogue that will appeal not only to fly-fishing enthusiasts but to anyone wanting to know more about Russia and what makes it reel and spin.

A passionate and beautifully written memoir...a vivid, compelling...portrait of a country that remains an enigma to most Americans.

Think of Montaigne as a Tocqueville with a fly rod who uncovers Russia in the raw.

A first-rate book...[with] memorable writing...Mr. Montaigne...has netted a darkly comic tale in which he is the picaresque antihero.