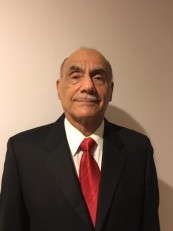 Dr. Mahdi Obeidi was in charge of the experimental program of the French built Material Testing Reactor in Iraq. He later led the Uranium Centrifuge Enrichment program, which is the pinnacle in the ongoing attempts to covertly obtain nuclear weapons capability. His work tells the story about the quest for nuclear weapons. It is about the intimidation, paranoia, and impossible deadlines of a rogue regime. It also tells how easy it is to get a nuclear capability through illicit efforts, as exemplified by his actual experience of entering the United States with a different name, designing the centrifuge in New York, getting materials and know how through the diplomatic pouch, and setting up fictitious front companies, which culminated in realizing one of the fastest and most efficient covert centrifuge programs in history.

In 2003, when the United States was looking for a suspected centrifuge program, he had ethical concerns that the information at his possession would fall in the wrong hands, which prompted him to cooperate with the Americans. While in the United States, Dr. Obeidi authored a bestselling book, The Bomb in my Garden, the Secrets of Saddam’s Mastermind, which was optioned by Johnny Depp for film rights. He has been active in his quest to stop nuclear proliferation, with lecture circuit throughout the nation including universities, such as Harvard and his Alma mater, the Colorado School of Mines, most DOE laboratories, NSA, numerous lectures for the FBI, along with many lectures at libraries, and conferences. He conducted scenario based training for HLS, the army, the air force, and DOE.

Dr. Obeidi experience is an eye opener showing how a rogue state or a non-state actor can circumvent the rules and pose a nuclear or radiological threat on the American soil. It can show, for example, how an intelligence officer in an American embassy can assess the threat of someone asking to attend a scientific conference in the United States through understanding the true motivation, be it personal, national, or ideological. The interplay between these factors can be instrumental in securing the homeland. Dr. Obeidi obtained his masters from the Colorado School of Mines in Chemical Engineering, and obtained his PhD from the University of Swansea in the United Kingdom in materials science and engineering. He supervised numerous masters and doctoral thesis.

The Bomb in My Garden is important and utterly gripping. The old cliché is true–you start reading, and you don’t want to stop. Mahdi Obeidi’s story makes clear how hard Saddam Hussein tried to develop a nuclear weapon, and the reasons he fell short. It is also unforgettable as a picture of how honorable people tried to cope with a despot’s demands. I enthusiastically recommend this book.

-James Fallows for The Atlantic

Indispensable...expertly organized and packed with telling vignettes, it is never less than riveting.

This one book will tell you more about Iraq’s quest for weapons of mass destruction than all U.S. intelligence on the subject. It is a fascinating and rare glimpse inside Saddam Hussein’s Iraq–and inside a tyrant’s mind.

-Fareed Zakaria, author of The Future of Freedom

This compact and absorbing book reads like a thriller...an eloquent tale of a scientist who spent 20 years in a "damned if I do and damned if I don't situation" and survived with family and sanity intact.